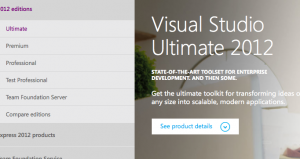 I am pleased to announce that after six weeks of non-stop fun at Zaaz Seattle, we have launched the new Microsoft Visual Studio 2012 Launch website. I landed this contract in early August and it has been a steady grind to cram as many features as possible into a very tight timeline. The last two days have been a riot, working late hours, collaborating and solving many problems, listening to very loud hip hop, jazz and dubstep and eating lots of good sushi. That’s right, this site was powered by dubstep and sushi.

So go forth and poke around. It’s a solid website built with mobile first in mind and scales beautifully to many devices: Windows Phones, Windows Tablets, Android Phones, iPhones, iPads and of course all of your modern desktop browsers. It also comes in 14 different languages. I’m most proud of the language picker in the footer. It took some serious tinkering and wrangling to get it to work right in the many different devices we needed to support. Go check it out.